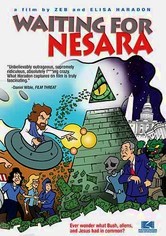 2006 NR 1h 17m DVD
A group of ex-Mormons in Salt Lake City wait for the implementation of NESARA, a secret law that would ban the IRS and replace George W. Bush with a UFO-flying Jesus Christ as the new American president. As the war in Iraq approaches, the group prays for alien intervention to ensure that NESARA takes hold in this utterly unbelievable documentary, an official selection at the 2006 Boston Underground Film Festival.