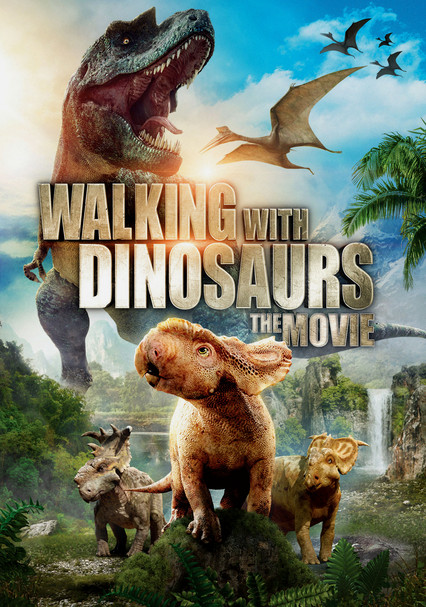 2013 PG 1h 27m Blu-ray / DVD
Step back in time -- way back -- and frolic with dinosaurs in this incredibly realistic film that totally immerses you in a prehistoric world. And while you're there, follow the exploits of a little underdog dino who goes on an epic adventure.

Parents need to know that Walking with Dinosaurs: The Movie is a fictionalized account of a prehistoric herbivore's life with a few scary parts. Instead of a documentary with narration, the ultra-realistic computer-generated production is more Ice Age than Jurassic Park with a plucky underdog protagonist (a Pachyrhinosaurus). There is predator-prey violence that disfigures and kills dinosaurs (one major death is off screen) that could be intensified by the 3D. Expect a romantic subplot that may turn off younger viewers. Language includes scatological references to dinosaur poop and a few insults, but it also includes clear references to the names of every prehistoric animal featured in the movie.

Patchi sees Juniper and instantly falls in love (a Barry White song plays in the background). He hopes to be her mate but it's implied that his brother, who becomes the herd leader, has the "right" to be with her.

Younger or more sensitive kids may be scared at several points throughout the film. Dinosaurs are killed (although it's shown off camera) by other dinosaurs. The leader of the herd brings all of the dinosaurs onto a frozen lake that breaks causing a few of them to fall through and drown. Fire erupts and consumes the dinosaur's habitat. As a young dinosaur, Patchi is nearly killed, and he's permanently disfigured by a carnivore that bites a chunk out of his frill. Male dinosaurs fight for dominance of the herd. Predators attack the Pachyrhinosaurus several times, and there are many close calls.

A few insults like "stupid" and "coward" and "runt." Plus some poop talk.

There are positive messages about the importance of scientific discovery, in particular paleontology. Kids will learn how "every fossil tells a story," and why that story is pivotal to understanding the past.