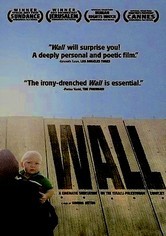 2004 NR 1h 36m DVD
By asking simple questions of those affected by the construction of a concrete wall between Israelis and Palestinians, filmmaker Simone Bitton allows the people to speak for themselves. The result is a portrait of the Palestinian inhabitants, the Israeli settlers and the officials who are fencing them in -- a thoughtful documentary that explores the sweeping emotions behind one of the most enduring struggles of the 20th and 21st centuries.