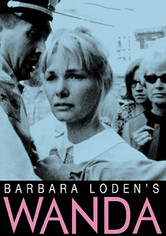 1971 NR 1h 42m DVD
In her first and only film as director, Barbara Loden (who was married to legendary producer-director Elia Kazan) stars as a wandering divorcée who has given up custody of her children, trading in domesticity for an aimless life on the road. She eventually teams up with a small-time crook (Michael Higgins) and sets off on an adventurous crime spree. Loden's startlingly honest portrait stands among the classics of independent cinema.