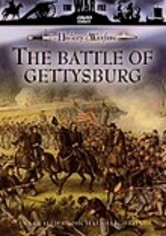 2007 NR 0h 55m DVD
The Battle of Gettysburg marked the turning point in the American Civil War. Historian Michael Leighton narrates this in-depth look at the three-day conflict that ended in a decisive victory for the Union's Maj. Gen. George G. Meade. Re-enactments, 3-D maps and photographs and other imagery from the era illuminate details of the conflict. The documentary also includes dramatic readings from the writings of those who were there.