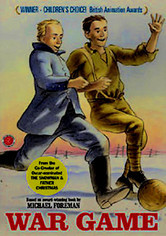 2001 NR 0h 29m DVD
Writer Michael Foreman's intriguing and heartwarming book is translated to the big screen in this animated film featuring the voices of Kate Winslet, Ben Warwick, Adam Godley and Colin McFarlane. Even during wartime, one can find grace, it seems, as evidenced by an unusual soccer match that ensues one Christmas during World War I, when three young soldiers and their English crew face off against a German squad.

Parents need to know that War Game is not a typical holiday story and those looking for a feel-good tale will be disappointed. The beautifully told short animated film is set during World War I and serves as a comment on war and humanity. While there is no graphic violence, much of the action is set in the trenches; there is gunfire, rats, bombs, and casualties. The subject matter could be too intense for younger viewers, but for those mature enough to comprehend the deeper meanings of Christmas and peace, War Game should provoke discussion about history, warfare, Christmas, and how the three are often conveyed in popular culture.

While not graphic, the violence and horror of war is strongly implied. There are sounds and images of machine gun fire, bombs, and injured soldiers.

Beyond the divisions of war and battles between countries and their armies, there is a shared humanity that unites us all.

Characters are shown smoking cigarettes and pipes in a historically accurate setting. While an officer talks on the telephone, there is a close-up of the phone, with a bottle of booze and a half-filled glass next to it.