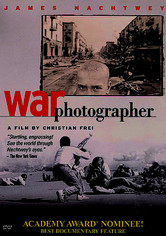 2001 UR 1h 36m DVD
In this engrossing, Academy Award-nominated documentary, director Christian Frei follows photojournalist James Nachtwey into the world's combat zones as he fights to capture the struggles of those who face harrowing violence in places such as Kosovo, Indonesia and the West Bank. Nachtwey skirts through murky politics to tell the stories of the suffering in hopes that he can bring attention to their plight, one picture at a time.