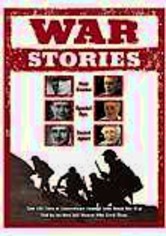 2002 NR 2h 30m DVD
Get firsthand accounts of the brutality and heroism exhibited during and after World War II. This video presents some fascinating stories: interviews with a British prisoner who survived Auschwitz; a spy who was captured by the Nazis and sent to prison camp later gives evidence to the war tribunals; a soldier who was tortured by the Gestapo later becomes a celebrated Nazi hunter; and much more.