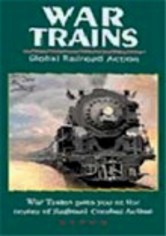 2002 NR 3h 0m DVD
Discover the role railroads played in a century of American combat with this three-part documentary. The program examines the history of trains, from their first use in the Civil War through both World Wars and the conflicts in Korea and Vietnam. Historians and eyewitnesses discuss the importance of the rail system as vintage films and photos reveal the visual history. Segments include "Combat Strategies," "Subvert and Destroy" and "Air Attacks."