War in the Pacific: From Pearl Harbor to Hiroshima 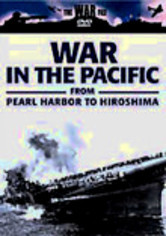 War in the Pacific: From Pearl Harbor to Hiroshima

2008 NR 0h 59m DVD
This documentary chronicles the aftermath of the attack on Pearl Harbor, when the U.S. and other Allied forces launched a naval campaign to disarm Japanese forces in the Pacific, with the end goal of taking over the enemy's islands. The film explores the conflicts in the region, which culminated in some epic battles, including the battles of Midway and the Coral Sea, the fight in the Marshall Islands, Iwo Jima and the American landing at Okinawa.