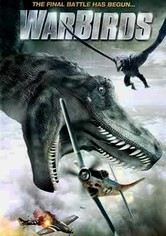 2008 NR 1h 26m DVD
While on a mission to deliver a devastating weapon to the Pacific front during World War II, a storm forces a group of elite female aviators to land on an eerie island where the Japanese aren't the only foe. As the plucky pilots fight enemy forces on the ground, they must also fend off gigantic flying dinosaurs if they hope to survive in this made-for-cable creature feature starring Brian Krause and Jamie Mann.