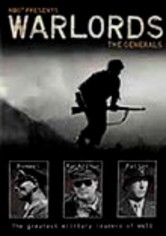 1981 NR 1h 30m DVD
Narrated by Hal Holbrook, this historical series showcases World War II's most influential leaders and the sinister and powerful forces that opposed them. Previously unreleased historical data and extraordinary archival footage of each battle inform this riveting program that includes segments such as "MacArthur: The Defiant General," "Patton: The Man Behind the Myth" and "Rommel: The Strange Death of the Desert Fox."