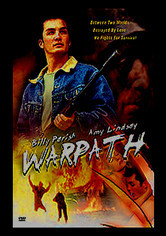 2000 NR 1h 41m DVD
In this taut tale of revenge, Billy Parish stars as Jim Longfoot, an American Indian man seeking justice after being beaten and forced to witness the rape of his wife by members of a bizarre cult. Summoning his native heritage, ancestral spirits and survival training, Longfoot sets out to even the score, but when he's framed for murder, he must evade capture by forces on both sides of the law. Amy Lindsay and Michelle Jones co-star.