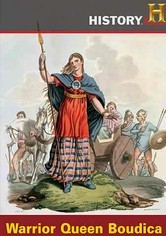 2006 NR 1h 40m DVD
With support from an array of scholars, this History Channel documentary profiles one of the most fascinating women you've probably never heard of: Boudica, queen of the Iceni, an ancient Celtic tribe that once inhabited Eastern Britain. When the Romans invaded the Iceni after King Prasutagus' death, they attacked the grieving queen and raped her two daughters. But Boudica's devastating revenge brought the unsuspecting Romans to their knees.