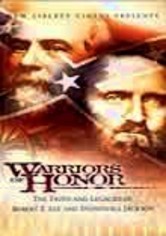 2004 NR 1h 21m DVD
In Warriors of Honor: The Faith and Legacy of Robert E. Lee and Stonewall Jackson, documentary filmmaker Brian Barkley chronicles the role that religion played for the two military leaders, while also presenting an in-depth look at the Civil War. During battles, Lee often asked for God's guidance and used his faith to help him make military decisions. Jackson, a deacon at his church, accepted his death from a war injury as God's will.