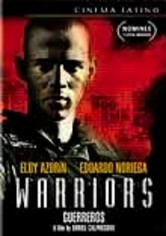 2002 NR 1h 36m DVD
Union general William T. Sherman said, "War is all hell." He might easily have been referring to the conflict in Kosovo. Director Daniel Calparsoro lenses a tense drama that revolves around a platoon of Spanish soldiers, following the innocent young men as they step from the training field into a hell for which nothing could have prepared them.