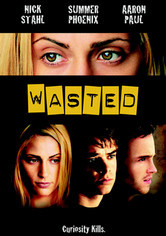 2002 R 1h 31m DVD
Samantha (Summer Phoenix) is a straight-a high school student whose drug addiction is masked by her many academic achievements. Also an addict, defiant Owen (Nick Stahl) uses drugs as an escape mechanism, but is quickly spiraling out of control. Meanwhile, their friend Chris (Aaron Paul) is aware of his peers' dangerous habits, but before he can help them, he must deal with his own problems first. Originally aired on MTV.