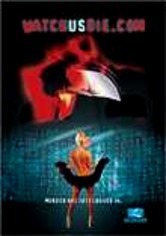 2001 NR 1h 30m DVD
Reality TV meets the Internet in this horror film about eight female housemates whose lives are broadcast on the Web 24 hours a day. When two of them die -- the first in what appears to be an accident down a flight of stairs, and then another in a hot tub -- the rest have to go on living under the watchful gaze of thousands of Web visitors, even as it appears that they're getting picked off one by one.