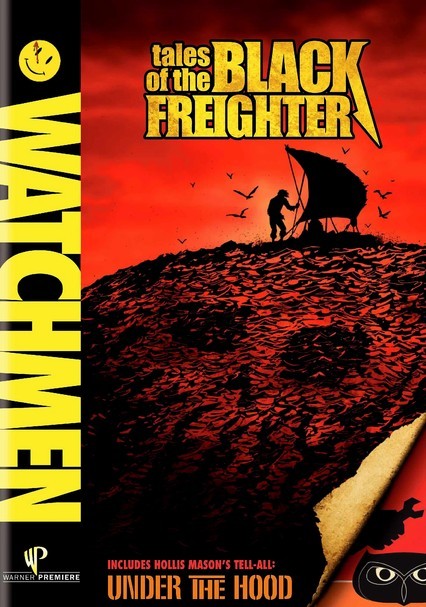 2009 R 1h 40m Blu-ray / DVD
This delectably dark animated short tells the gruesome tale of a shipwrecked sailor (voiced by Gerard Butler) forced to go to horrific lengths -- including building a raft of corpses -- to return home and warn his family of an imminent attack by an evil pirate ship. Based on a story within the graphic novel Watchmen, this release was originally part of the script for director Zack Snyder's 2009 live-action adaptation of the comic book.

Parents need to know that this isn't a sequel to the Watchmen movie, just supplementary material. The balleyhooed segment on this DVD, an R-rated pirate cartoon, is hideously violent and thematically grim, with murders, dismemberment of rotting corpses, and a hero defeated utterly by evil. Even worse; it's short, just about 20 minutes long. The rest of the running time is devoted to a (PG-rated) faux documentary about "real" superheroes. Neither may mean much if you don't know the graphic novel and movie to which it gives background.

A woman is described as a "whore." A wooden figurehead has bare breasts. In the separate "Under the Hood" live-action segment, there are vintage pin-up posters and a superheroine has super sex appeal.

Murder by bloody beatings and strangulation. An explosion literally blows men apart. Exceptionally ghoulish details of rotting corpses, including unraveling intestines and oozing body fluids as gulls peck at them. One of the gulls is also graphically killed and eaten.

The "Black Freighter" segment -- in which a heroic ship's captain and devoted husband and father transforms into a murderous maniac -- has a pessimistic outlook and is very grim throughout. The far milder "Under the Hood" segment emphasizes the human side of so-called superheroes and supervillains.

Tie-in to vast quantities of related merchandise. The DVD carries promos for other DC Comics-related titles and the Watchmen video game.

References to drinking/smoking, especially in the live-action segment about a superhero who succumbs to alcoholism.