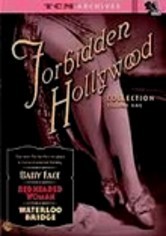 1932 NR 2h 40m DVD
The women are wicked and the stories steamy in these pre-Production Code Hollywood dramas. In Waterloo Bridge, the wealthy family of a soldier forces him to give up the woman he loves when they learn she's a prostitute. Mae Clarke, Douglass Montgomery and Bette Davis star. Then, Jean Harlow is the gold-digging Red-Headed Woman who snags her married boss (Chester Morris) while carrying on another affair with a chauffeur (Charles Boyer).