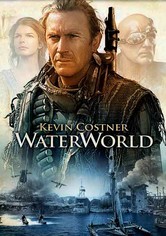 1995 PG-13 2h 16m Blu-ray / DVD
In a futuristic world engulfed by water, a beautiful barmaid rescues a mutant seafarer from a floating island prison. They escape, along with her young charge, and sail off aboard his ship. But the trio soon becomes the target of a menacing pirate.

Parents need to know that this post-apocalyptic epic postulates a semi-barbarous future where everything is traded and bartered -- including sex. The heroine is glimpsed naked from the rear as she tries to use her body to bribe the hero (he declines the offer), and there's a near-rape of her by another man in a similar "business" arrangement. Frequent violence includes death by machine guns, spears guns, bombs, crashes, knife slashes, drownings, and fireballs. There's a gruesome threat of execution by drowning in some sort of sludge made from human decomposition, and a mutilated main villain demonstrates graphically that he's lost an eye. A little girl is occasionally threatened with danger/death, usually via drowning. Swearing includes one use of the F-word, multiple S-bombs. Much cigarette smoking, and some drinking-carousing happens among the bad guys. The flamboyant lead villain, at one point, is made to look like a Christian evangelical preacher. Some viewers may be grossed out by the introduction of the Kevin Costner character, urinating and then distilling/drinking his own urine.

Rear-end nudity only as Helen strips naked to trade sex with the Mariner in return for safety on his craft, and she wears fairly skimpy clothing throughout. Later another seagoing drifter expects to have sex with Helen in a swap, but the hero interrupts the near-rape. Later Mariner and Helen make non-explicit, more consensual love.

Explosions, gunfire (with human casualties at close range), people and craft impaled by spear guns. Hand-to-hand combat and knifings. The evil Deacon loses his eye, and we see the bloody socket from time to time. A threat of execution by drowning in disgusting sludge.

Environmental message at varying decibels, starting with the fact that the polar ice caps have melted (although "global warming" is never explicitly mentioned). The savage-thug villains, working out of a notorious real-life oil tanker, identify themselves with industrialization, "development" and, presumably, capitalism.

The villainous "smokers" live up to their names, chain-smoking cigarettes.