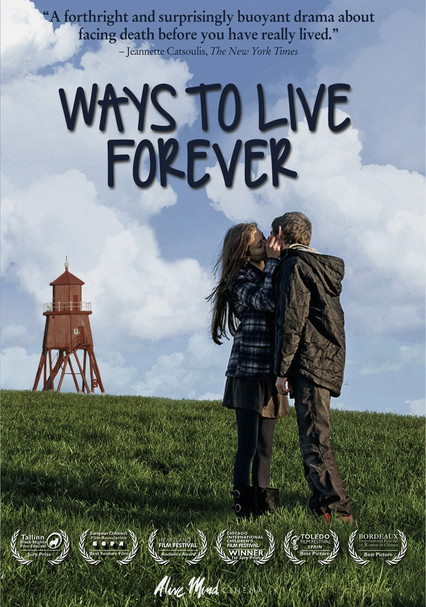 2010 PG-13 1h 39m DVD
Ways to Live Forever is an inspirational tale of overcoming obstacles. Like most inquisitive boys, 12-year-old Sam wants to know about UFOs, horror movies, ghosts, and girls. Sam also has leukemia, and although his mother and father don't want him to dwell on it, Sam wants to know everything about his disease and death, a possibility he might face.

Parents need to know that Ways to Live Forever is an emotional adaptation of author Sally Nicholls' 2008 children's novel about a 12-year-old English boy dying from leukemia. The story follows how a teacher encourages Sam and his friend Felix (who also has cancer) to write because words are a way "to live forever." There are a few British swears and insults like "bloody" and "daft," and a couple of sweet first kisses for Sam, but otherwise there's not much iffy stuff in the movie in terms of specific content. But the heavy themes and focus on dying makes it a better fit for older tweens and teens who will be able to handle the sadness of Sam's inevitable death.

Sam kisses a girl twice (one time it's just a peck, but the second time it's a deeper kiss).

It's not violent, but two kids die in the movie and are shown on their deathbeds either at home or at the hospital. In one scene, Sam gets a bloody nose that scares him and his family.

This is a movie about life -- however short it might be for some people -- being a precious adventure without a moment to lose. Sam and Felix each have a terminal illness, but they don't let that get in the way of achieving things they'd really like to do before they die. The movie also encourages curiosity, asking life's tough questions, and recognizing the importance -- and the permanence -- of the arts.

The boys' wish lists include trying a drink and a cigarette.