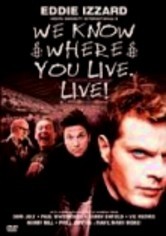 2001 NR 1h 34m DVD
Eddie Izzard hosts this entertainment bonanza that showcases some of the best comedians and musicians from the United Kingdom. It features interviews with and heart-pounding performances from such headliners as U2, Dom Joly and Phill Jupitus. Jonathan Ross, Tom Jones, Harry Hill, Vic Reeves, Harry Enfield, Simon Day, The cast of Goodness Gracious Me, Paul Whitehouse, The Stereophonics, Badly Drawn Boy and more also appear.