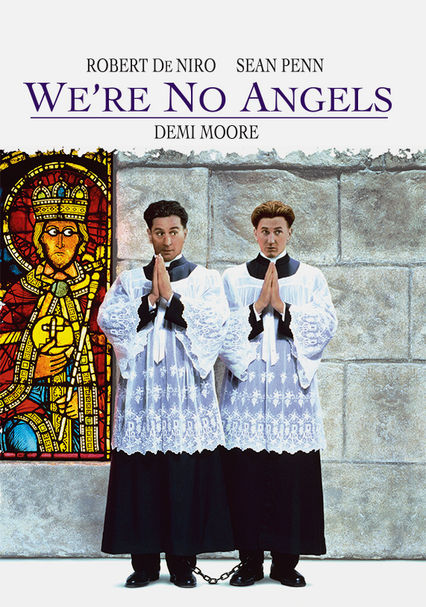 1989 PG-13 1h 46m DVD
A pair of bogus priests are really escaped convicts who haven't got a prayer of sidestepping a police blockade and making it across the U.S.-Canadian border -- unless they manage to successfully pass themselves off as clergymen.

Parents need to know that We're No Angels is the 1989 remake of the 1955 Humphrey Bogart movie of the same name. It features Robert De Niro and Sean Penn as escaped convicts posing as priests in a Depression-era border town. There's a bit of jailbreak violence, gunshots, a brief shot of female nudity, a small body count with a little bloodshed, some minor profanity sprinkled throughout ("s--t"), but it's mostly a fish-out-of-water tale about two unrefined, uneducated characters passing as priests. Best for older teens but not likely to enthrall kids who aren't fans of De Niro or quirky late-'80s crime comedy.

Brief shot of a woman naked from the waist up, dressing; a strategically covered pinup poster; a guy confesses to a priest that he cheats on his wife.

A man is shot to death by a barrage of gunfire and falls into an icy waterfall; some guards are shot and killed during a jailbreak; a deer is run over and shown bleeding at the mouth; a girl almost drowns; a convict is whipped and punched; guns pulled throughout.

Possibility of redemption; all criminals are not bad people.