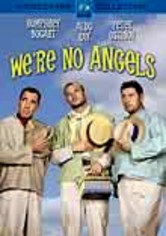 1955 NR 1h 45m DVD
Humphrey Bogart, Aldo Ray and Peter Ustinov play three escaped inmates who hatch a plan to steal from a shopkeeper on Christmas. But their plans change when they find themselves actually growing to like their target and his family. Besides, the luckless merchant is apparently about to lose his shirt, as his business is unraveling. So, instead of robbing him, the convicts decide to help him, a mission that proves wildly complicated.