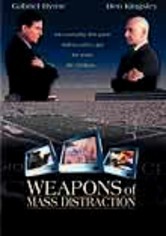 1997 R 1h 36m DVD
As two warring media moguls (Gabriel Byrne and Ben Kingsley) grapple for ownership of a coveted professional football team, they use the newspapers, magazines and television stations they own to destroy each other's reputations. Larry Gelbart (Tootsie, television's "M*A*S*H" and the musical "A Funny Thing Happened on the Way to the Forum") penned this big-business satire originally produced for HBO, co-starring Mimi Rogers and Jeffrey Tambor.