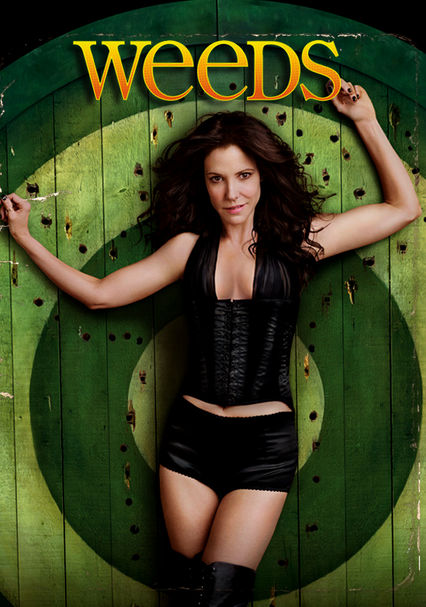 2005 TV-MA 8 seasons
Nancy Botwin takes a big hit when her husband dies suddenly and she's left struggling to maintain her comfortable lifestyle -- so the suburban soccer mom summons up her inner entrepreneur and starts selling pot to her affluent neighbors.

Desperate times force suburban widow Nancy Botwin into an unlikely business venture as a pot dealer in the first season of this hit series. She now faces the challenges of managing motherhood, marijuana and the suspicions of the DEA.

In Season 2, Nancy learns that Peter is a DEA agent, Conrad and the crew rent a grow house, Andy enrolls in rabbinical school, and Celia vows to unseat Doug in the upcoming city council election.

Matthew Modine joins the cast as an enterprising real estate mogul who hooks up with pot-dealing widow Nancy and her friendly nemesis, Celia. Meanwhile, Nancy's son Silas finds romance with a religious girl, and Nancy gets a legitimate job.

Nancy, Andy, Silas and Shane move to the border town of Ren Mar, where Guillermo sets up an operation to smuggle drugs in from Mexico. Nancy gets romantically involved with Guillermo's boss, the handsome and ruthless major of Tijuana.

The hit dramedy lights up another season after the fourth-year finale found suburban mom-turned-drug lord Nancy Botwin sharing some shocking news. While Andy still wrestles with his feelings for Nancy, Shane shows an interest in the family business.

The entire extended Botwin family takes up new identities, fleeing with little Stevie in tow, as Nancy is pursued by Esteban's henchmen and the feds. When money gets too tight to buy enough supply, Nancy comes up with an alternate plan.

After confessing to a murder she didn't commit to save the lives of her three sons, suburban mom-turned-drug dealer Nancy Botwin continues to use her arsenal of intellect and charm to keep her head above water in this award-winning dramedy.

As Season 8 of the quirky Golden Globe-winning series unfolds, more is revealed about the surprising turn of events that landed Nancy and her family in the crosshairs of yet another enemy.