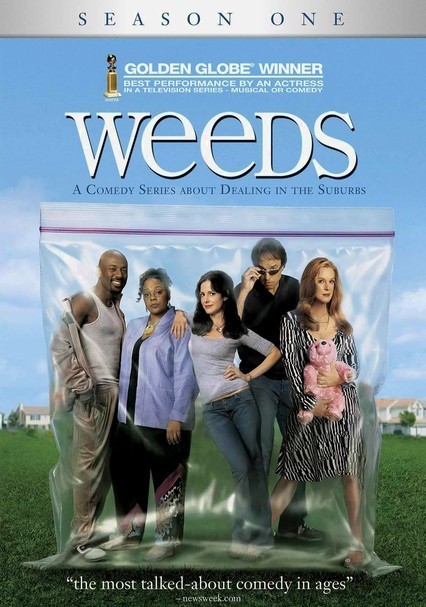 2005 TV-MA 2 discs
Desperate times force suburban widow Nancy Botwin into an unlikely business venture as a pot dealer in the first season of this hit series. She now faces the challenges of managing motherhood, marijuana and the suspicions of the DEA.

Parents need to know that this addictive (pun intended) dramedy about drug dealing in the suburbs is definitely not for kids. The main character, Nancy, makes parenting decisions that most people would disagree with -- especially deciding to sell marijuana to provide for her two sons. Her friends and family members are likewise flawed, complicated people whose behavior is questionable at best and unbelievably irresponsible and cruel at worst (Nancy's best friend has a habit of belittling her overweight daughter, for example). Most conversations are peppered with strong language; partial nudity and uninhibited sex scenes are common, and the themes are unquestionably adult-oriented. That said, it can be both funny and insightful, too, and grown-ups might get a contact high just by watching.

Infrequent full-frontal nudity and lots of partial nudity (breasts, buttocks, more). Frequent sex scenes (some fairly explicit, even for pay cable, and some involving teen characters). A character takes a young boy to a "massage parlor" as a coming-of-age treat. Sex toys show up on occasion.

Somewhat sporadic depending on the season/episode, but it can be quite shocking when it happens. Stand-off scenes between drug dealers include lots of guns; Nancy participates in a drive-by; other bloody wounds appear (some from gunshots, some from other sources -- like animal attacks). Several abrupt deaths. Also some beatings and car accidents.

Don't look for positive messages here. Although the Botwins love each other, their family relationships are constantly tested and twisted beyond most people's breaking point. Selfishness is often rewarded, and plenty of illegal activity takes place without a hint of consequence.

Few specific product names are mentioned (though Nancy does love her Diet Coke), but most of the denizens of Agrestic are very materialistic.

The show's premise is closely tied to marijuana -- growing it, selling it, smoking it, baking it into pastries, etc. Later seasons expand to cover more of the illegal drug industry. Adults and teens also drink regularly, and some use drugs like cocaine.