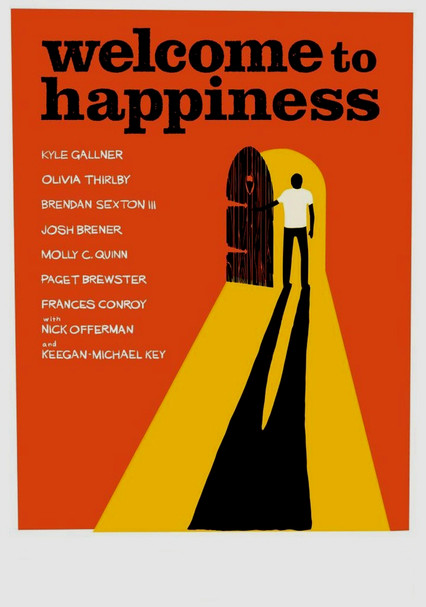 2016 PG-13 1h 49m DVD
At his landlord's request, young author Woody Ward becomes the guardian of a mysterious door inside his closet, opened only to those in mental agony. When Woody's own miseries begin to mount, he desperately seeks to gain entry.

Parents need to know that Welcome to Happiness is a comedy-drama-fantasy about a little door that allows whoever uses it to potentially change events from their past. Though the movie is very uneven, it also has a good spirit, and many teens may find it a positive experience. But the content is a bit mature, so it's not a great fit for younger viewers. There's a near-suicide attempt with a gun, as well as verbal stories about violent events (including guns and shooting). A young woman is missing a hand as the result of a car accident, and drunk driving and parental loss are discussed. The main couple kisses passionately, starts to remove their clothing, and climbs into bed for sex, but there's no nudity. Language is minimal, with nothing stronger than uses of "goddamn" and "shut up."

Kissing and sex between main characters. No graphic nudity.

A secondary character comes close to attempting suicide with a gun. A young woman is missing a hand as the result of a car accident. Spoken story of a robbery that involves shooting and death. Spoken story about parents dying in a car crash. Sounds of arguing neighbors through apartment walls.

Encourages viewers to think about their actions and to consider that even the negative ones can have positive effects (sometimes). Some viewers might pick up on subtle themes along the lines of "everything happens for a reason" and "teamwork," but they're less clear.

Story of a drunk driver.