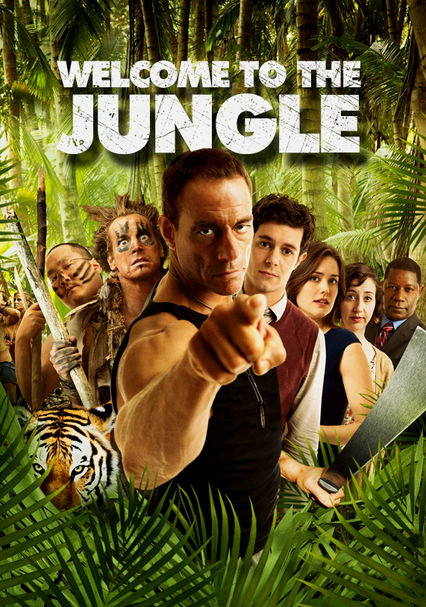 2014 NR 1h 33m Blu-ray / DVD
When workplace colleagues are sent to a team-building exercise in the wilderness, their corporate adventure goes awry as they find themselves stranded. With the hierarchical order falling apart, the office bully takes charge.

Parents need to know that Welcome to the Jungle is a 2013 movie in which a corporate retreat to a deserted island leads to orgies, sex slaves, implied rape, and drugs -- and that's just the beginning. This movie attempts to be funny by being excruciatingly crass but fails to be humorous, so the result is what Lost or Lord of the Flies would have been like if they'd been written by an alcoholic college fraternity with a collective C-average. There is frequent profanity (including "f--k"), brief female nudity, drinking, and drugs. Overall, this is an attempt at a satire of the corporate hierarchy, but it fails on every level, and what's left is a gratuitously vulgar, crass, and unfunny movie with no redeeming value, not even as mindless entertainment.

A character is believed to be mauled to death by a tiger. Characters fight in a pit. Characters come close to being decapitated. Implied rape.

Frequent profanity throughout the film, including "f--k" and "p---y." Inappropriate sex talk in an office setting. While ogling an Asian woman, a man says that he would like to "eat a fortune cookie out of her butthole." The word "gay" is used in a negative sense. At an office meeting, a character is caught drawing all over a picture of the person making the presentation and adding the thought cloud, "I need lube" above his face.

This failed satire has no positive messages.

Characters drink alcohol and smoke marijuana. After being trapped on an island, a man spikes the food and drink of his coworkers with hallucinogenic drugs so they do his bidding.