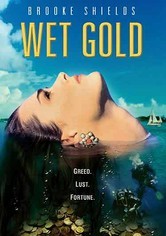 1984 NR 1h 31m DVD
After aging beach bum Sampson (Burgess Meredith) tells waitress Laura (Brooke Shields) about a fortune in treasure he claims is buried in a sunken ship, she ropes her skeptical boyfriend, Chris Barnes (Thomas Byrd), into joining them to look for the loot. Financially strapped diver Ben Keating (Brian Kerwin) also comes along, and tensions between the foursome -- both greed- and lust-related -- grow as they get closer to finding the gold.