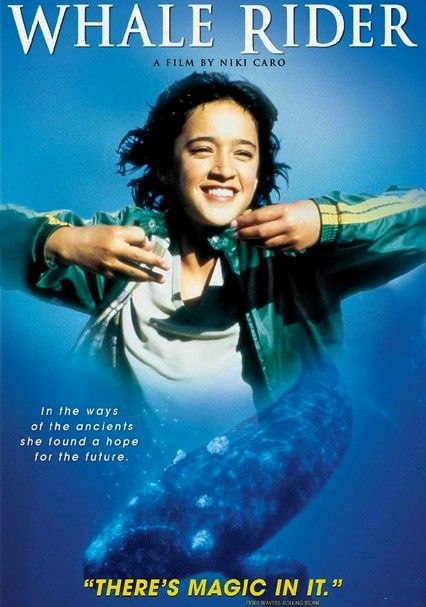 2003 PG-13 1h 41m DVD
A Maori tribe must contend with the distinctly nontraditional concept of having a female leader when the intended heir to the throne dies during childbirth, leaving his twin sister, Paikea, to prove herself in this inspiring coming-of-age tale.

Parents need to know that Whale Rider has some tense family confrontations. The death of a mother and baby in childbirth is very sad. A character is injured but ultimately recovers. There's brief strong language regarding female and male genitalia. Characters drink and smoke, and there's a brief drug reference (a bag of marijuana and drug paraphernalia are shown). The movie presents a minority culture with great dignity and respect, and the theme of equality is exceptionally well handled. Despite her youth, heroine Pai demonstrates extraordinary strength of character as she learns all that the next leader of her people must learn, trying to keep it secret from her disapproving grandfather. The grandfather hurtfully dismisses her but comes to accept her and the idea that a female can lead.

The story begins with the death of a mother and baby in childbirth. Agonized faces and moans are on display, but no gore. Beached whales die despite the efforts of the Maori to save them. No blood is shown. Boys are taught traditional fighting techniques. The leader is hit in a training fight and praises the boy who hits him. A character appears to have died by drowning.

Reference to female genitalia. During a tribal training session, the leader promises that boys' "d--ks" will fall off if they don't follow his directions.

Deep emotional connection to ancestral worship and tribal ways conveyed. Stay true to your culture without slavishly obeying every rule.

Adult characters drink socially. Some smoke but try to hide it. One vows to quit. An adolescent boy smokes. A bag of marijuana and drug paraphernalia are shown.