What Kind of Love Is This? 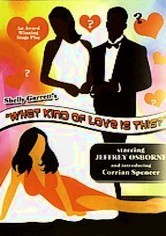 What Kind of Love Is This?

2006 NR 1h 30m DVD
Three fun-loving girlfriends -- Brandi, Cynthia and Brenda -- head out for drinks to debate the finer points of landing a good man. But their discussion stops short when Brenda's boyfriend shows up with another woman. This modern dating comedy is based on the play by African-American playwright Shelly Garrett. Corrian Spencer and Jeffrey Osborne co-star.