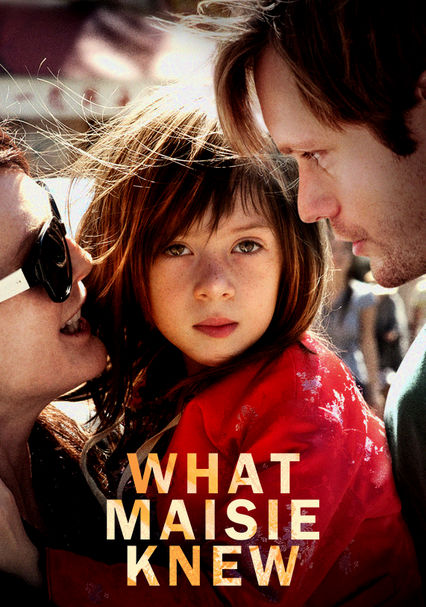 2013 R 1h 38m Blu-ray / DVD
In this updated rendering of the timeless Henry James novel, a perceptive 6-year-old girl becomes a bargaining tool when she gets caught in the midst of a toxic custody fight between her self-seeking, childish parents.

Parents need to know that What Maisie Knew is a moving, sometimes disturbing drama that examines the world through the lens of 6-year-old Maisie, a downtown New York City girl whose glamorous parents (Julianne Moore and Steve Coogan) are breaking up loudly and painfully in front of her. Some scenes may be difficult to stomach, especially for kids whose parents are going through or have undergone a divorce or separation. Maisie is often shown in heartbreakingly neglectful situations -- at school, with neither parent remembering to pick her up; being shuttled back and forth between apartments; etc. She also sees her parents fight and swear ("f--k," "s--t") at each other, and adults drink and smoke around her/other children.

Allusions to sex, rather than actual sex scenes. A man flirts with and later marries his child's babysitter; his ex-girlfriend marries a young man she just met. Some kissing.

Parents fight and curse at each other in front of their young child. Sometimes they place their child in danger by neglecting her.

Strong language, sometimes used around a 6-year-old, includes "f--k," "s--t," and "a--hole." A woman gives a man the finger while their child is in plain sight.

Separations can be very hard on children, especially when their parents aren't placing the kids' best interests first. But the world is full of kind-hearted people who are able to shower these kids with the care and attention they need. And though there is heartbreak, there's also hope.

Labels/products seen include Apple and Pyrex. Nothing excessive.