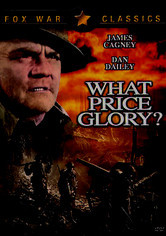 1952 NR 1h 50m DVD
Legendary Western director John Ford takes a sabbatical from the sagebrush and helms this World War I drama about two American doughboys (James Cagney and Dan Dailey) in France who both fall in love with the same innkeeper's daughter (Corinne Calvet). Question is, will they kill each other before they even get to the Germans? Based on the Broadway play by Maxwell Anderson.