What Were We Thinking?!: From Innocence to Decadence 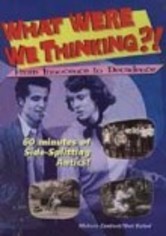 What Were We Thinking?!: From Innocence to Decadence

2004 NR 1h 0m DVD
History makes great fodder for comedy in this hilarious collection of archival film footage and public service announcements. This unusual documentary reveals the paranoia and hysteria of postwar America, a time when the Red Scare appeared to take over common sense, when teenagers and their wayward hormones morphed into a national problem, and when the threat of nuclear war drove citizens to sidesplitting despair.