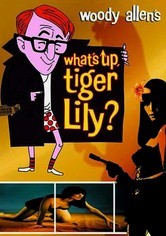 1966 NR 1h 20m DVD
Woody Allen's first directorial effort started life as a B-grade Japanese spy drama. Allen dubbed in an entirely new soundtrack, featuring brand-new dialogue that turns the story into a ridiculous search for the perfect egg salad recipe. The pop group Lovin' Spoonful is also on hand to give the film a hip 1960s feel that's hilariously out of synch with what's occurring on-screen. A laugh riot from beginning to end!