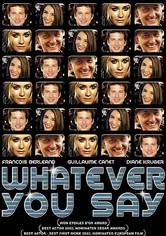 2002 NR 1h 50m DVD
Bastien (Guillaume Canet), a low-level production assistant on a hit TV show, thinks he's about to get his big break when his ultra-successful boss (François Berléand) invites him to spend the weekend at his country house to start work on a new series. Once there, the executive and his beautiful wife (Diane Kruger) show no interest in talking about television, and Bastien begins to suspect that they have very different plans for him.