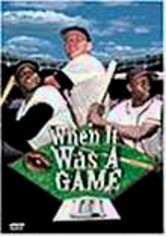 2000 NR 1h 0m DVD
In this third entry of the ongoing HBO documentary series celebrating America's favorite pastime, the focus is on the 1960s, when Major League Baseball was slowly evolving from pure sport to big-bucks entertainment. Using footage of players and fans, the film covers the Yankees' ascension to greatness, the western expansion of both leagues, the increasing inclusion of black players and the rise of free agency.