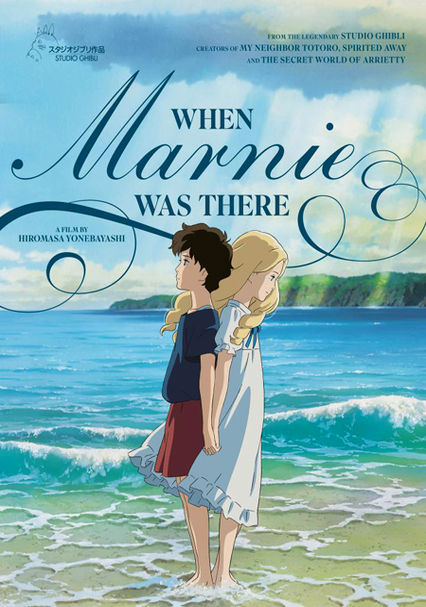 2015 PG 1h 43m Blu-ray / DVD
A lonely city girl with chronic asthma, Anna Sasaki is sent to spend the summer with relatives in a seaside town where the air is clean. Before long, Anna makes friends with a mysterious girl living in a deserted villa -- but is she real or a dream?

Parents need to know that When Marnie Was There is possibly the last film produced by Japan's legendary Studio Ghibli, now that master animator/studio co-founder Hayao Miyazaki has retired. An adaptation of a British children's book by Joan G. Robinson, the slow-paced story focuses on Anna, a sad, lonely, self-hating foster child whose only friend is a mysterious girl who lives in a supposedly abandoned mansion. There's some insult language ("fat pig," "pathetic"), some scary scenes in an old silo, and a moment of threatened violence (Anna pulls a knife on a girl who's bothering her), as well as one scene in which an adult offers Anna a drink of wine at a party. But otherwise the movie is fine for tweens who can handle the themes, pace, and plot twists.

Anna pulls a knife on a girl who's bothering her. She has an asthma attack early in the film. Some falls/bruises, and a scary sequence set in an old, decrepit silo during a storm.

Anna uses insult language, often but not always in reference to herself: "fat pig," "ugly," "stupid," "pathetic," "unpleasant," "moody." Anna says that she hates herself more than once.

Anna's journey teaches viewers about the importance of self esteem and of valuing those who love you, even if they aren't related to you by blood.

Adults drink at a party, and an adult offers Anna a glass of wine. Some smoking.