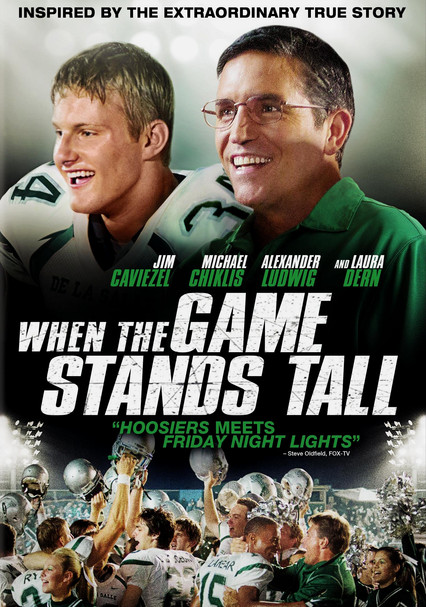 Parents need to know that When the Game Stands Tall is based on the true story of Coach Bob Ladouceur, who has the distinction of coaching the high school football team with the longest winning streak in sports history. This sports biopic -- which is packed with positive messages about teamwork, hard work, and learning from adversity -- is fine for older tweens and teens, though those who know and enjoy the game are most likely to fully appreciate the movie. There's virtually no language or sex (aside from some kissing and references to "getting it on"), but there is some startling violence, including the senseless, execution-style death of a beloved character. Teens drink at a party, and the coach smokes cigarettes. Watch through the credits to see footage of the real Coach Lad (who has a couple of cameos as another coach) saying some of the same lines depicted in the movie.

Young couples briefly hug and hold hands; a guy asks a friend if he's getting it on with his beautiful girlfriend, and the guy says he and his girlfriend are "waiting for the big day." A husband and wife kiss.

A character is shot and killed, execution-style, by a young man with a gun. A father is abusive toward his son. Two friends get into a shoving match. Football players on the field get into a fight that's broken up.

The movie is full of inspirational adages and messages like: "Don't let a game define who you are, let your lives do that"; adversity teaches more than triumph; football isn't about the score but about the team; "perfect effort" is what makes for a winning team; and being on a team isn't about your personal records but about looking out for the person next to you. These messages will all sound familiar to dedicated athletes, but they're still teachable statements for all kids and teens. There's also a strong focus on faith and its application to teamwork and sportsmanship.

The coach smokes cigarettes. Teens drink at a party.