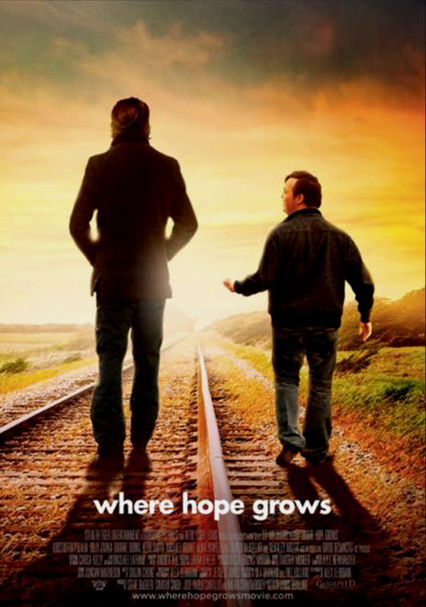 2015 PG-13 1h 35m DVD
After chronic anxiety attacks bring a premature end to Calvin Campbell's professional baseball career, he spirals into depression -- until he begins an unlikely friendship with a young supermarket clerk who has Down syndrome.

Parents need to know that Where Hope Grows is a moving faith-based drama that's also likely to appeal to anyone who's interested in a touching story of redemption and friendship. The movie focuses on an alcoholic former Major League Baseball player who strikes up a friendship with a grocery store produce stocker with Down syndrome. The movie deals with some heavy themes -- including substance abuse, unhealthy relationships, adultery, the pressure to have sex, and a scary accident that kills one character. It also makes the delcaration that the "R" word ("retarded") should be seen as unusable as the "N" word. But this powerful film also explores the transformative power of friendship and faith and embraces the idea of redemption.

Katie and Colt kiss a few times and make out on a bed, but she's not ready to have sex. Katie and her father discuss sex; she calls him a hypocrite, since he obviously had sex in high school. A married woman attempts to kiss a man who isn't her husband, but he flinches away.

Colt pressures Katie for sex, even after she confesses she's a virgin and isn't ready. He calls her a "tease" and is forceful about her owing him sex. He attempts to rape her, but someone knocks him out with a fire extinguisher. Colt threatens Produce more than once. Calvin punches his best friend. A terrible accident between a drunk driver and another character. One person dies.

A positive influence can transform a life. A tale of redemption and friendship, the movie is about finding a friend where you least expect one, stepping up to own your mistakes, and reconnecting with your children.

Calvin is an alcoholic; for most of the movie, he almost always has some kind of drink in his hand. Calvin's best friend, Milt, is also a heavy drinker. Other adults drink recreationally. Another supporting character is a recovering alcoholic who goes to AA meetings. Terrible car crash involving a drunk driver.