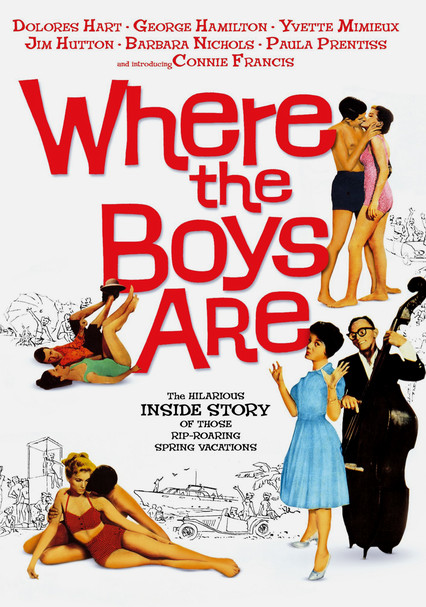 Parents need to know that Where the Boys Are, a classic romantic-comedy from 1960, raises some of the important issues for college kids of that era: 1). Will I find a husband during Spring Break in Fort Lauderdale? The answer: Probably. 2). How much partying is permissible? The answer: Lots, mostly on the beach with plenty of underage drinking and some drunkenness. 3). Should a girl have sex before marriage? The answer: A resounding no, unless you're willing to suffer some pretty devastating consequences. So, an assortment of college-age females are divided into two categories: "good" girls and girls who'll have sex. The college-age males are divided into two categories: boys who'll do just about anything to convince a girl to sleep with them, and the 1 percent who are obsessed with music. Amid the fun, comic portrayals, quirky romances, and lovable stereotypes are some serious and suspenseful moments, all concerning the most naive of the young female students. Desperate to be in love, she abandons the strict rules of her upbringing and finds herself in jeopardy from predatory males and (spoiler alert) is the victim of an off-camera sexual assault.

Movie's basic premise (and all the conflict) is based on whether or not girls will have casual sex before commitment. Multiple discussions about "good girls" and importance of not succumbing to sexual pressure. With one exception, all the young men are determined to encourage girls they've just met to have sex. All manner of persuasion is used to seduce the quartet of very innocent girls. On-screen sexual behavior limited to kissing and embracing. One girl has off-camera consensual sex, then is a victim of a sexual assault, also off camera. Standard 1960s bathing suits are worn in many scenes.

Spoiler alert: It's strongly implied that a young woman is forced to have sex (off camera); in the aftermath, she's distraught and walks onto a busy highway oblivious to the traffic, suffers a "close call."

Promotes strong friendships, adherence to virtuous behavior. Set in 1960, the film disapproves of casual sex for women; naive character who engages in sexual activity faces severe consequences of what is presented as a lapse in judgment.

Some 1960 Florida hotels and nightclubs are identified.

Adults and underage college students drink alcohol on the beach, in bars, in hotel rooms. Some drunkenness -- an inebriated young man gets escorted from the beach in several scenes. A young woman comes home very drunk and is put to bed by her friends; she wakes up with a hangover. Some smoking.