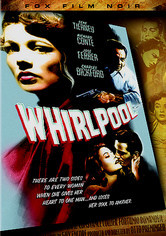 1949 NR 1h 38m DVD
Ann Sutton (Gene Tierney) is married to a successful psychoanalyst (Richard Conte), but all isn't hunky-dory when she's arrested for shoplifting. When a somewhat dubious hypnotist (José Ferrer), who's more interested in mind control than cures, saves Sutton from certain social scandal, the patient soon finds herself caught up in a murder hunt. Otto Preminger directs this psychological thriller with a first-rate musical score by David Raksin.