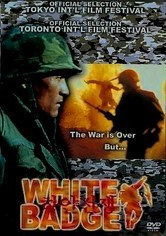 1992 NR 2h 2m DVD
A visit from an old friend sparks unpleasant memories for Sgt. Kiju Han (Sung-Kee Ahn), a journalist living in Korea who served with American troops during the Vietnam War. As the leader of a Korean infantry unit, Han followed orders to snuff out the enemy. Now, however, he feels responsible for the carnage his unit caused. This South Korean film provides another perspective on the story told by American classics such as Apocalypse Now.