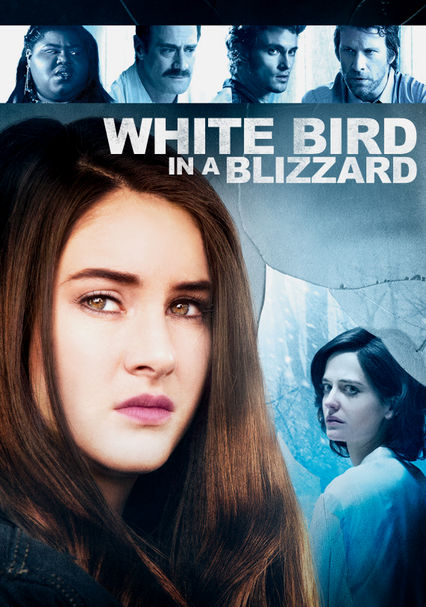 2014 R 1h 31m Blu-ray / DVD
When 17-year-old Kat Conners's mom, Eve, vanishes, the teen relishes her newfound freedom -- until the reality of her loss sets in. While on break from college, Kat returns home and learns the strange facts behind Eve's disappearance.

Parents need to know that although White Bird in a Blizzard stars teen fave Shailene Woodley (Divergent, The Fault in Our Stars), it's a mature independent drama with heavy themes and subject matter. Part coming-of-age tale and part Gone Girl-like mystery about what happened to Woodley's on-screen mother (Eva Green), it includes frequent conversations about and references to teen sex, and the main character is preoccupied with how often she can have it, either with her boyfriend or, later, a much older man. Woodley also appears partially nude (her breasts are in full view in one lingering first-time scene) a couple of times. The language is almost as mature as the sex ("f--k" is used many times, as are "s--t" and "a--hole"), and the violence includes references to domestic abuse and murder. Teens also smoke pot and drink.

17-year-old Kat says that because she's already had sex, it's all she can think about all the time. She asks her boyfriend to have sex a few different times and reminisces about when they used to do it more often. She makes frequent crude comments about sex (i.e. "If I don't get d--k soon, I'm going to die"). Kat's first time with he boyfriend is depicted in a realistic manner, with them both naked on her bed (one shot shows them from the side on top of each other) and with a close-up shot of the guy's bare chest against her visible breasts. At 18, she has sex with a much older man who's in a position of authority; another scene shows an underage man in bed with an adult man. Kat's older lover makes suggestive comments about her body and what he's going to do to her, but the actual sex isn't shown in detail (they're shown kissing and then bare-shouldered under the sheets). A married couple's dissatisfying sex life is discussed, with their daughter contemplating that her mother doesn't have orgasms and her father masturbates to pornography (he's shown with his hand down his pants while looking at Hustler magazine).

Domestic violence within a marriage. A mother disappears; an investigation is launched to determine whether it's foul play or abandonment. A teenager dreams of her mother dying, bloodied, lying naked and nearly dead in the snow, frozen in ice, etc. The possibility of murder is addressed several times.

Frequent strong language includes many uses of "f--k" as both an expletive and euphemism for sex, plus "s--t," "bitch," "a--hole," and exclamations like "Jesus!"

Kids don't ever really know their parents, and they shouldn't assume they understand the intricacies of their parents' marriage. Also highlights how teenagers can be sexual beings who make decisions based on their physical need for intimacy.

Kat's dad drives a Volvo, and she has a Joy Division poster in her bedroom.

Kat asks her boyfriend if he was at a friend's house getting stoned, and he coyly answers, "maybe." He's later shown smoking a joint in her bedroom. Underage teens drink in a couple of scenes.