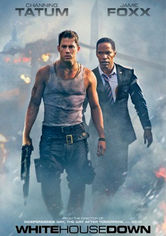 2013 PG-13 2h 17m Blu-ray / DVD
When a paramilitary group engineers a violent takeover of the White House, the president must try to hide from the attackers until he can be rescued. Caught up in the chaos, Secret Service agent John Cale ends up becoming his sole protection.

Parents need to know that White House Down is a patriotic thriller in the vein of Olympus Has Fallen and Independence Day, in which the country is saved by one brave man with a gun -- in this case Channing Tatum. Like Independence Day, which was also directed by Roland Emmerich, there's a lot of violence, but most of it is on a grand scale -- explosions, helicopters/planes crashing, and deaths the audience doesn't see too up close. There are a few hand-to-hand combat scenes and a tense hostage situation in which people (some in high levels of the administration) are executed or wounded. A young girl is frequently in danger and is almost killed on a couple of occasions (which ups the movie's intensity level), and the president seems dead. There's absolutely no sex or romance, but there's some language, including a single "f--k you," plus "s--t," "bitch," and "a--hole." Ultimately it's a crowd-pleasing action movie with a well-intentioned but slightly contradictory message involving both peace and the importance of armed defense.

High-tech thermal equipment briefly reveals (through a building) the outline of two people on top of each other (sex is implied).

Similarly to movies like Independence Day, there's lots of violence and an extremely high body count (collateral damage), but there are only a few bloody injuries. People die of bullet wounds, explosions, or blunt force. The weapons range from hand and machine guns to grenades and anti-aircraft missiles, military helicopters, and nuclear missiles. There are also a few hand-to-hand battles and various scenes of executions or close-range murders. Civilians, including an 11-year-old girl and a school group, are held hostage and threatened.

The movie has a strong patriotic message, but it's a bit conflicted, as some characters consider it the president's duty to be hawkish and kill all enemies, while others are for diplomacy. Sacrifice is also discussed again and again -- both positively (the importance of saving one person) and negatively (who cares whether we bomb an entire nation if its leaders are a threat to the United States?). Trust is a theme as well, and there's a strong father-daughter relationship in the movie.

Cars in the president's fleet include a Cadillac limousine and several Chevy Suburbans. Other product placements prominently mentioned or shown include Sony VAIO laptop, Nike sneakers, and Nicorette gum. The director's other White House movie, Independence Day, is overtly referenced.

The president chews Nicorette gum and is obviously a former smoker. A staffer for the vice president drinks on a plane.