Who Shall Live and Who Shall Die? 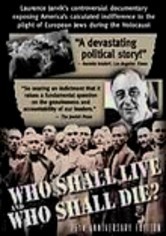 Who Shall Live and Who Shall Die?

1982 NR 1h 25m DVD
Laurence Jarvik's thought-provoking documentary examines what the United States knew about the Holocaust during the early days of World War II, and whether it could have prevented the wholesale slaughter of millions of Jews. Using previously classified documents, rare newsreel footage and contemporary interviews, Jarvik evaluates key decisions of the government to make the case that much more could have been done to prevent this atrocity.