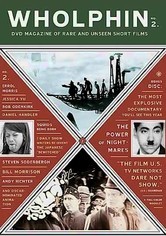 2008 NR 2h 37m DVD
The second edition of Wholphin's mix of short films, documentaries and cartoons features Steven Soderbergh paying tribute to Jean Luc Godard with a sci-fi short and documentary filmmaker Errol Morris profiling business tycoon Donald Trump. Other works include two Oscar-nominated shorts, a funny instructional video, a gothic horror tale, an appearance by Andy Richter, and a revamping of the Japanese version of "Bewitched" by writers of "The Daily Show."