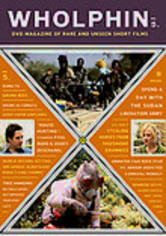 2008 NR 2h 35m DVD
The fifth edition of this eclectic mix of shorts features Darfuri rebels being smuggled out of Sudan, a Rubik's Cube champ who can do it one-handed and blind-folded, and a study on drunken bees. Also included are the Oscar-nominated short "Madame Tulti-Putli," which follows a solitary traveler, and "House Hunting," which stars Paul Rudd and Zooey Deschanel as a couple looking for their dream home.